The Jaguar I-PACE eTROPHY was back on track today for round six of the 2019/20 series – reverting to the original Berlin circuit direction. The Tempelhof circuit has already hosted two of the seven ‘Lockdown Showdown’ races ahead of ‘Super Sunday’ with a further two races including a Reverse Grid race.

The Jaguar I-PACE eTROPHY was back on track today for round six of the 2019/20 series – reverting to the original Berlin circuit direction. The Tempelhof circuit has already hosted two of the seven ‘Lockdown Showdown’ races ahead of ‘Super Sunday’ with a further two races including a Reverse Grid race.

A day of many missed ATTACK MODE activations for many saw a strategically executed race from reigning champion Sérgio Jimenez, who took another lights to flag victory in the all-electric touring car series. Series rival Simon Evans lost out on the runners up position when he missed his activation and was forced to settle for P3 behind round four winner Cacá Bueno.

Alice Powell, who stayed towards the front for the majority of the race, finished in P5 and set the faster first sector time in her Jaguar ran racing Team Germany eTROPHY. Jaguar China Racing driver, Nick Foster, retired from the race after a collision in the final few laps with Powell.

Fahad Algosaibi secured a hat-trick of wins in the PRO-AM category to extend his lead by 47 points.

The temperature in the car was incredibly hot and the track was so slippery again today. It was really hard for everyone, but I had another good race. There were five drivers fighting for the win and I’m very happy I took the top stop of the podium again. However, we do still have four races to go, with two tomorrow, so I know I need to keep focussed.

I’m very happy now – the race was much better than qualifying. The temperature in qualifying was so hot that I don’t think the set up I used on the I-PACE eTROPHY was the best. I had a good fight with Evans and I’m extremely happy that I started P5 and finished P2. There are still four more races to go so everything is still to play for.

Any day you get on the podium is always a good day, but I did make a few too many mistakes today. The car had fantastic pace but I missed the ATTACK MODE which cost me and was a rookie error. At least we get to come back tomorrow and do it all again, I’ll re-focus overnight and get ready for Super Sunday. 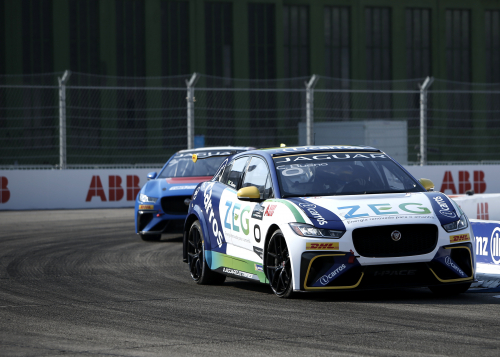 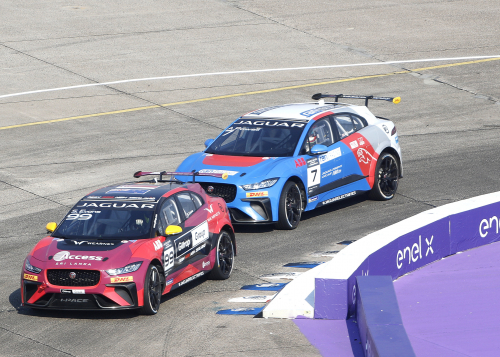 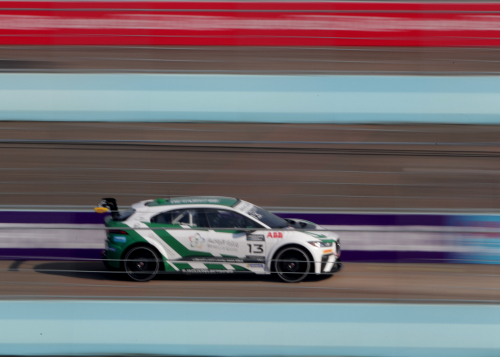 I was another victim of ATTACK MODE today. I unfortunately went a bit deep and missed the zone but I am still leading the PRO-AM category and feeling confident. I want to keep doing my best, pushing and having fun in the Jaguar I-PACE eTROPHY.

That was up there with the best eTROPHY racing I have seen. It has been swelteringly hot today in Berlin and that race certainly didn’t do anything to cool things down. It simmered away nicely for the first 15 laps then we had 4 laps of boiling action. Our Super Sunday double header is tomorrow which will be intense for everyone. The reverse grid will really make the drivers think.

Watch Round 5 of the Jaguar I-PACE eTROPHY live and free via on youtube.com/jaguarcars direct to smart TVs